Miyoshi is an average young woman who has caramel blonde hair and hazelnut brown eyes that are a lighter yellow at the bottom. She has a fairly pale complexion and frequently changes clothes, therefore has no definite appearance in terms of her attire. However, one definite characteristic of her attire is that she always wears heels.

Miyoshi is a kind young woman yet she has the ability to hurt others verbally through her sharp tongue, although most of the time it is unconscious. She's a very patient character as depicted by her willingness and frequency to listen to Mrs. Tanaka's complaints despite how tiresome they are for her, even doing so on her day off in Episode 11.

She's also a very determined woman, trying her best to do her job properly as a civil servant despite only choosing the career pathway for its stability. Despite her ability to cope and be patient, it is depicted that even she has an extent when Taishi Ichimiya, Lucy Yamagami and Yutaka Hasebe find her crouching, hiding under her desk so she can avoid the elderly people as they speak for a long period of time but states that she does in fact feel bad for doing so.

Even before his official appearance, Miyoshi dreaded Tanaka's existence due to Mrs. Tanaka having proposed the idea that Miyoshi should marry her grandson and stated that he was very responsible. She attempted to decline the proposal politely yet Mrs Tanaka was very forceful in her approach, saying she'd bring her grandson next time.

During Episode 7, when Tanaka makes his debut, she's concerned upon their meeting as demonstrated through her facial expressions and actions of sweating profusely and her smile slightly twitching. Coincidentally, Lucy Yamagami is also with Miyoshi and she uses this opportunity to her advantage, holding Lucy's hand tightly so she doesn't leave her alone. It's most likely that Miyoshi began to relax gradually whilst her and Tanaka had been talking about his grandmother and the reason as to why she must've been ill, hence, letting go of Lucy's hand which allowed her to leave the two. After their meeting, it was proven that he began to visit her every day through Miyoshi's thought process.

During Episode 8, her impression of Tanaka plummets as she witnesses him forcefully taking her out to dinner against her will, she proceeds to follow them and reports the incident to Yutaka Hasebe and passes a message to him, intended for Tanaka, stating that he was awful due to taking a girl somewhere against her will, even going as far as calling Tanaka a 'lowlife bastard' the following morning.

During Episode 9, when Mrs. Tanaka resumes her complaints with Miyoshi and attempts to bring up Tanaka, she bluntly states that the both of them shouldn't speak about him. Mrs Tanaka appears to pick up on this hint and proceeds to talk about her son's wife instead. There is also an event where she encounters Kaoru and is invited to dinner along with Lucy, upon their conversation, she discovers that Tanaka had asked Lucy out (date) which decreases her existing bad impression on him, infuriating her that he took her out forcefully for such a nonsensical reason. Although she finds out he's like that towards everyone after Kaoru Hasebe clarifies that he asked her out too, she tells Lucy that she only feels better about him on a minuscule amount, even gesturing the amount with her hand.

In Episode 10, upon discovering that he is outside their office when she's finished work, she attempts to leave, stating that she'll regret it if she gets involved with him when he questions her as to why she's running away. She becomes increasingly irritated at his behavior of being so incomprehensible that he will only trouble Lucy if he tries to invite her out for dinner again so he won't have regrets. Being forward, she tells him that he is a burden to Hasebe and Lucy and that he should leave them alone. However, he insists that he must do something but this only increases Miyoshi's frustration, saying he is not trying to atone but rather it's for self-satisfaction. Realizing she's said too much, she pauses and apologizes swiftly, only for a prolonged response from Tanaka to fall to the ground in tears, questioning her as to what he should do so he doesn't have 'regrets about regrets', the conversation of regret continues which resulted in an invitation for dinner. Although this scene isn't shown, the dinner commences in Episode 11.

During their dinner, their conversation is always about Hasebe and comments that he's very similar to his grandmother. This is most likely due to the fact that Mrs Tanaka speaks about her son's wife and Tanaka talks about Hasebe, in doing so, she requests he changes the topic to something other than Hasebe and this shocks him as suggested by his movement of being slightly agape and placing his wine glass down, he becomes stumped, unable to think about a topic before suggesting 'portfolio management services'. She laughs at the proposal of such a boring topic and becomes relieved, her impression of Tanaka getting better. Meanwhile, he apologizes for choosing that certain topic before moving onto his regrets, however, she faints from the wine.

When she awakens, she realizes she is being carried by Tanaka (in a princess/ bridal-style) and becomes extremely flustered and requests that he put her down. After a certain period of time, he tells her that he had fun and that they should do it again, Miyoshi remains silent for several seconds before agreeing, most likely reciprocating the feeling of having fun, thus, bettering her impression of Tanaka. The following morning, she says that Tanaka is fine as so long as Hasebe isn't involved.

Their first encounter is during Episode 9 when Kaoru visits Lucy during work and Miyoshi realizes they're siblings, commenting on how similar they appear but says she wouldn't mistake them for the same person when Lucy asks her as she was pranked through that method (incident in Episode 5).

The trio go out for dinner at a restaurant and Kaoru comments on being jealous as she wanted to see Tanaka when she realizes they've met him. She also remarks how he's her type which surprises Miyoshi as a brief moment is shown where she widens her eyes before Lucy exclaims in surprise. Upon their conversation, she realizes Tanaka asked Lucy out, which furthers her already bad impression on Tanaka.

Throughout the entirety of the anime, Miyoshi tends to see Mrs, Tanaka very often that she listens to her complains, in which she soon begins to dread due to how long they drag on for and this is even portrayed during Miyoshi and Mrs. Tanaka's encounter during her day off (in Episode 11) where she begins to complain and Miyoshi makes a mental note to never go out on her day off again.

Despite this, it is shown that she does care about Mrs. Tanaka as when Jōji Tanaka (grandson) comes to visit Miyoshi, she asks him how Mrs. Tanaka is doing. The feeling is reciprocated as Mrs. Tanaka defends her when Tōko Ichimiya scolds Miyoshi, telling her to be more clear about what she's trying to say. 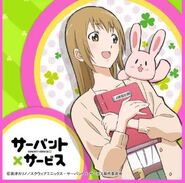 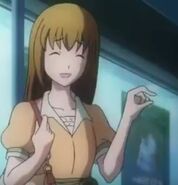 Miyoshi gesturing how much better she feels about Jōji Tanaka 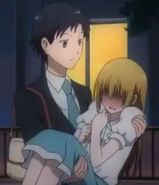 Miyoshi being carried by Tanaka

Tanaka being stumped when Miyoshi asks him to change topic 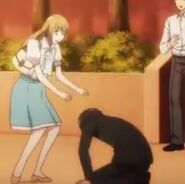 Miyoshi after Tanaka falls to the ground in tears

Miyoshi hiding under her desk

Community content is available under CC-BY-SA unless otherwise noted.
Advertisement