Jōji Tanaka (田中 譲二, Tanaka Jōji) is a character from the anime Servant x Service. He is a 22-year-old single banker, the grandson of Mrs. Tanaka and the childhood friend of Yutaka Hasebe who never beats Yutaka in anything, which leads to a very awkward friendship.

Tanaka is often seen wearing his business attire consisting of a grey-blue tie, a white undershirt, a black suit and black pants. His hair and eyes are black.

He has a muscular build as depicted after the ending credits in Episode 7 on the Servant Quiz.

Tanaka tends to be very straightforward with his feelings. According to him, he has a lot of regrets due to Yutaka Hasebe. This can be observed as to when he invites Lucy Yamagami to dinner and forcefully takes her along when she declines and asks her out just to have a girlfriend before Hasebe and when he invites Saya Miyoshi out so he won't have 'regrets about regrets'. Despite his rash personality, he is a gentleman when accompanying a lady, shown when he walks beside Miyoshi, taking the side near the road and walks at her pace, then proceeding to carry her when she passed out during their dinner.

He is also very competitive as seen in how he acts in front of Hasebe, constantly trying to get the upper hand in terms of games, sports, dating and so on, although it fails.

On the other hand, most of his conversations are about Hasebe and if asked to speak about another topic, they're normally boring or work-related as he had attempted to bring up a topic about portfolio management services during his dinner with Miyoshi.

Tanaka has held regrets towards Hasebe due to the remark he had made to him during a basketball game stating 'he wasn't even trying' when Tanaka had been defeated, irritating Hasebe and proceeding to throw the ball at Tanaka's face.

Tanaka is also shown to be highly competitive towards Hasebe, trying to win against him through any means whether it be dating, games, sports, studies, cooking, art, chores and so forth. Although unlike Hasebe, who is considered an actual prodigy, he puts in effort when competing. His competitiveness isn't actually reciprocated as Hasebe attempts to avoid Tanaka whenever he comes to the office, making his co-workers state that he had already left. Although, despite this, he cares for Hasebe, telling Chihaya to 'stop saying mean things about Hasebe', this was also shown in Episode 8 when he comments that Hasebe could've been anything he wanted to be yet 'gave into despair and went to some random college' and says it was a waste of his natural ability.

Tanaka is shocked at Lucy's mere existence at first due to her being the only girl Hasebe has ever hit on. As a result, he's somewhat curious about her and decides to ask her out for dinner on Episode 8. It is during this time he states that he wants Hasebe to feel loss by stealing his girl and asks her to date him, although it was immediately stopped by Hasebe. He sincerely apologizes afterwards, even bowing his head stating he said a lot of insensitive things, but when he claims that he was going to ask her out whether he's drunk or not, he receives another punch from Hasebe on the head.

Kaoru tends to find Tanaka 'cute' as he's her type. However, this was misinterpreted by Lucy and Miyoshi believing that Kaoru may have been romantically interested in Tanaka. When questioned what she meant by her 'type', she elaborated as to how he was the type to make her laugh and proceeded to show photos of when he was a child. The two don't interact very often outside of the time when he introduces himself to her when he was in elementary school, stating that despite how irresponsible he was, Hasebe still became his friend and the time that he states how admirable Hasebe is and becomes determined to try even harder as his friend. He returns to Kaoru, stating that the only way to repay him is to win against him so he can stand by Hasebe's side. Hence, he asks her to date him in order to get a girlfriend before Hasebe although she bluntly refuses. Afterwards, Tanaka questioned Kaoru to where Hasebe transferred to.

Their first form of interaction is when Tanaka returns, stating that his grandmother had forgotten her purse. Their conversation is mostly about how Hasebe is at work, she explains that he's irresponsible, gaudy and wonders if he should really be messing around with Lucy so seriously which causes Tanaka to intercept and tells her to stop saying mean things about him. She apologizes to him frankly which makes him realise his outburst towards her and also apologizes while departing.

When he leaves, Miyoshi questions if something had happened and Chihaya clarifies it to her, stating something about 'BL' (yaoi), most likely joking to her that Tanaka is romantically interested in Hasebe, although Miyoshi doesn't understand the reference and asks her what it means.

In Episode 8, Chihaya informs him that Hasebe has already gone out to eat with a co-worker and is shocked, proceeding to question her as to what Hasebe eats and what he's doing to make moves on her.

Having been told by his grandmother to marry Miyoshi, he makes his first appearance within the office during Episode 7. apologizing for the awkward thing her grandmother had said then proceeds to state that he came to see 'what she looked like' as it is a family rule to follow everything his grandmother says.

Shortly after, he approaches her when she's finished work although she quickly attempts to go back home, however, he intercepts and stops her, proceeding to start a conversation about Hasebe with her, claiming he was here to challenge him until she tells him that he already went home because there was a new game release. As a result, he proceeds to speak about his regrets, leading her to scold him, stating that he isn't trying to atone but rather for self-satisfaction. After pausing, he insists that he is regretting his actions while in tears and falls to the ground. Unconsciously, he assigns her the role of his advisor, asking her what to do so he doesn't have 'regrets about his regrets', unable to answer him, he proceeds to invite her out to dinner. Although it isn't actually shown, it was explained by Miyoshi.

The two go out for dinner although he speaks about nothing other than Hasebe, and when asked by Miyoshi to change the topic to something else, he appears stumped and is unable to think of anything. Warily, he attempts to speak about portfolio management services, causing Miyoshi to start laughing. He becomes bashful and slightly flustered, later noting that it was boring.

As Miyoshi passes out from drinking wine, he carries her on the sidewalk until she awakens. Although, he comments that although his original purpose was to speak about his regrets to Miyoshi, they didn't even speak about that subject. This is most likely due to the fact that he enjoys his time with her despite always talking about Hasebe as he tells her that dinner with her was 'fun' and suggests that they should do it again. 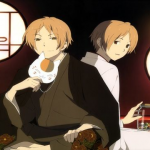